I had three brothers and six sisters:

Clarence Marcellus was the eldest, born 30 June 1891 in Provo, Utah. He married Myrl Eleanor Cluff 26 August 1915 in the Salt Lake Temple. He had a pleasing personality and loved a little humor and good times. He became an excellent carpenter at which he made his livelyhood. He was hired by the LDS Church as a carpenter for many fine meeting houses. He died 27 August 1970.

Vera Anna Bean was my oldest sister, born 8 December 1892 at Provo, Utah. She married Samuel Whitney Pincock on the 12 January 1921 in the Salt Lake Temple. She was a gentle, sweet woman who had a large family. She died 26 January 1971.

{PICTURE: Leah Harriet Bean}
Leah Harriet Bean was born 14 March 1899 at Provo, Utah. She married Leigh Martineau the 7 January 1926 in Salt Lake City, Utah. They were sealed 3 years later in the Salt Lake Temple on 3 October 1929. She loved children though they were not able to have any of their own. She seemed a fairy godmother to all the cousins. They did adopt two children, brother and sister, later on.

{PICTURE: Melva Edna Bean}
Following me came another sister, Melva Edna Bean who was born the 6 June 1902 at Provo, Utah. She married Lelan Anderson in Salt Lake City, Utah the 6 June 1928. They were sealed in the Logan Temple the 29 October 1940. She is a person interested in everyone and is very kind and considerate.

{PICTURE: Ruby Merline}
Ruby Merline Bean was born next on the 19 February 1904 at Provo, Utah. She never married. She became an excellent elementary school teacher and followed that profession all of her life,

{PICTURE: Ruth Hannah Bean}
Ruth Hannah Bean was born 28 August 1905 at Provo, Utah. She married first Frank L. Soule the 14 June 1930 in Nevada. Frank died and on the 24 November 1954 she married Alvin H. Schnurle in St. Anthony, Idaho. She has not had any children. She is a sweet friendly person. She is also a good artist.

{PICTURE: John Aldon Bean}
Then lastly came another brother, whom I was most happy to have. He is John Aldon Bean born 24 March 1907 at Provo, Utah. He married Ione Wellard the 19 December 1928 in the Salt Lake Temple in Salt Lake City, Utah. He like Clarence has become very proficient in the carpentry business. He is always a jovial person to be around.

As brothers and sisters we always had fun times together and have lots of love for each other. I remember sleeping with Clarence. He was so hard to wake up in the mornings. Father would call and call. Clarence would answer and then turn over and go back to sleep. This used to bother me but not him.

As a family we would go up Provo Canyon about twice a summer for a picnic and usually stayed overnight. Father would leave some hay on the wagon and we would ride up on the hay. We would usually camp at a beautiful spot and sleep outside under the stars. We enjoyed eating the food because it always tasted better out there.

We were all taught how to work and knew our jobs had to be done when father got home. All the girls were taught to sew and cook. They are all excellent cooks and homemakers and the sons were good providers. 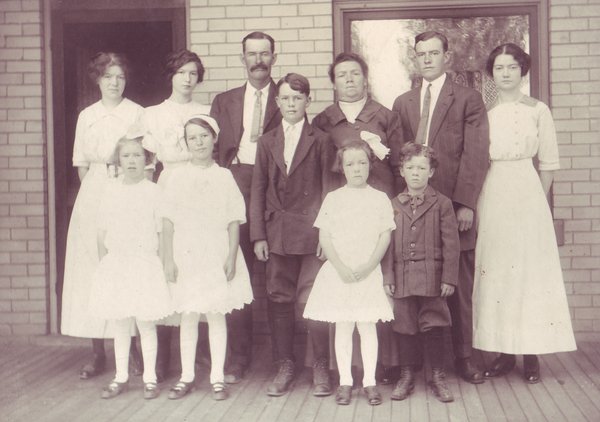